Over 5,000 living kidney donor nephrectomies are performed annually in the US. While the physiological changes that occur early after nephrectomy are well documented, less is known about the long-term glomerular dynamics in living donors.

Donors showed parallel increases in single-kidney renal plasma flow (RPF), renocortical volume, and glomerular filtration rate (GFR) early after the procedure, and these changes were sustained through to the late post-donation period. We used mathematical modeling to estimate the glomerular ultrafiltration coefficient (Kf), which also increased early and then remained constant through the late post-donation study. Assuming that the filtration surface area (and hence, Kf) increased in proportion to renocortical volume after donation, we calculated that the 40% elevation in the single-kidney GFR observed after donation could be attributed exclusively to an increase in the Kf. The prevalence of hypertension in donors increased from 14% in the early post-donation period to 57% in the late post-donation period. No subjects exhibited elevated levels of albuminuria.

Adaptive hyperfiltration after donor nephrectomy is attributable to hyperperfusion and hypertrophy of the remaining glomeruli. Our findings point away from the development of glomerular hypertension following kidney donation.

NIH (R01DK064697 and K23DK087937); Astellas Pharma US; the John M. Sobrato Foundation; the Satellite Extramural Grant Foundation; and the American Society of Nephrology. 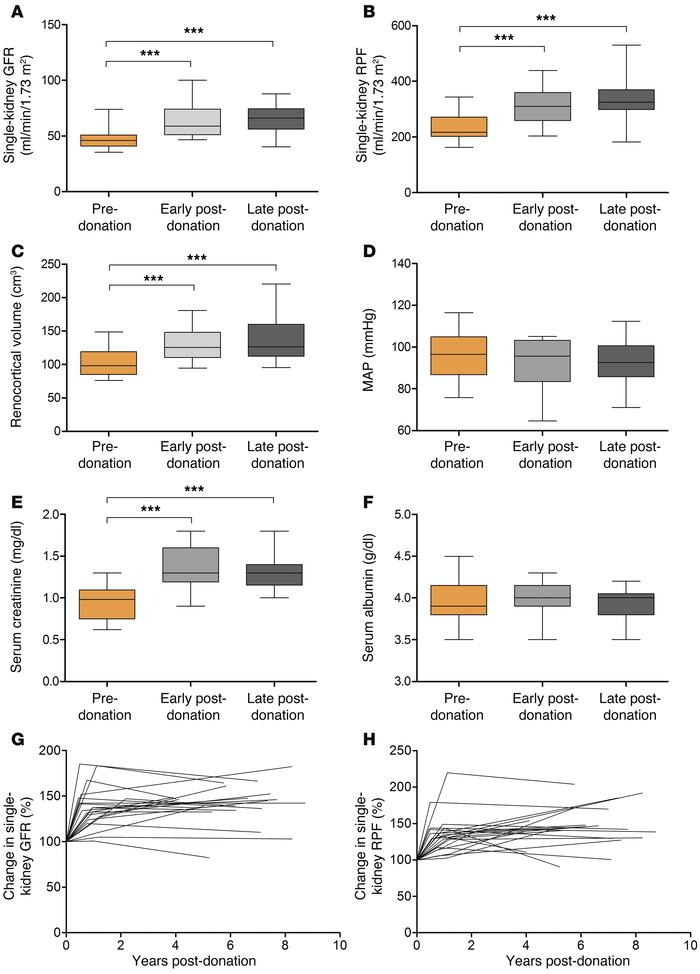