One of the main unresolved questions in solid organ transplantation is how to establish indefinite graft survival that is free from long-term treatment with immunosuppressive drugs and chronic rejection (i.e., the establishment of tolerance). The failure to achieve this goal may be related to the difficulty in identifying the phenotype and function of the cell subsets that participate in the induction of tolerance. To address this issue, we investigated the suppressive roles of recipient myeloid cells that may be manipulated to induce tolerance to transplanted hearts in mice. Using depleting mAbs, clodronate-loaded liposomes, and transgenic mice specific for depletion of CD11c+, CD11b+, or CD115+ cells, we identified a tolerogenic role for CD11b+CD115+Gr1+ monocytes during the induction of tolerance by costimulatory blockade with CD40L-specific mAb. Early after transplantation, Gr1+ monocytes migrated from the bone marrow into the transplanted organ, where they prevented the initiation of adaptive immune responses that lead to allograft rejection and participated in the development of Tregs. Our results suggest that mobilization of bone marrow CD11b+CD115+Gr1+ monocytes under sterile inflammatory conditions mediates the induction of indefinite allograft survival. We propose that manipulating the common bone marrow monocyte progenitor could be a useful clinical therapeutic approach for inducing transplantation tolerance.

CD11b+CD115+Gr1+ monocytes are required for tolerance induction to vascularized allografts. 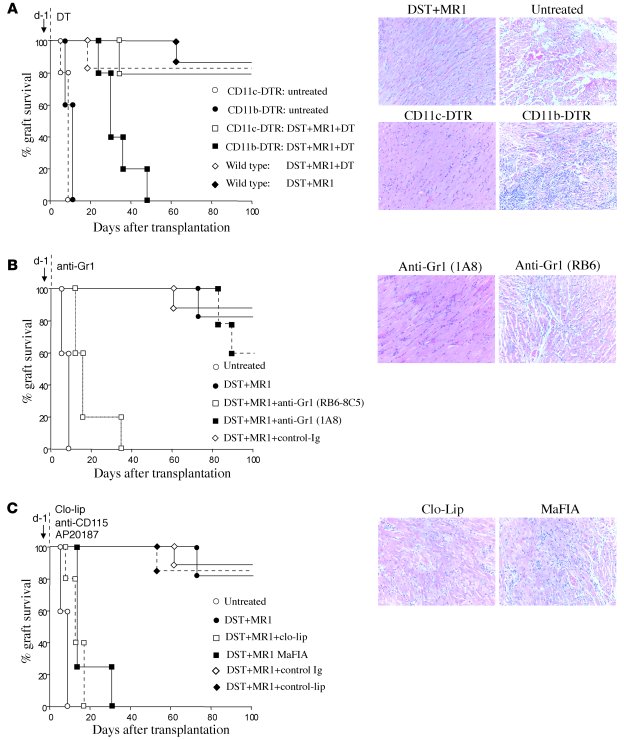