Ischemia causes kidney tubular cell damage and abnormal renal function. The kidney is capable of morphological restoration of tubules and recovery of function. Recently, it has been suggested that cells repopulating the ischemically injured tubule derive from bone marrow stem cells. We studied kidney repair in chimeric mice expressing GFP or bacterial β-gal or harboring the male Y chromosome exclusively in bone marrow-derived cells. In GFP chimeras, some interstitial cells but not tubular cells expressed GFP after ischemic injury. More than 99% of those GFP interstitial cells were leukocytes. In female mice with male bone marrow, occasional tubular cells (0.06%) appeared to be positive for the Y chromosome, but deconvolution microscopy revealed these to be artifactual. In β-gal chimeras, some tubular cells also appeared to express β-gal as assessed by X-gal staining, but following suppression of endogenous (mammalian) β-gal, no tubular cells could be found that stained with X-gal after ischemic injury. Whereas there was an absence of bone marrow–derived tubular cells, many tubular cells expressed proliferating cell nuclear antigen, which is reflective of a high proliferative rate of endogenous surviving tubular cells. Upon i.v. injection of bone marrow mesenchymal stromal cells, postischemic functional renal impairment was reduced, but there was no evidence of differentiation of these cells into tubular cells of the kidney. Thus, our data indicate that bone marrow–derived cells do not make a significant contribution to the restoration of epithelial integrity after an ischemic insult. It is likely that intrinsic tubular cell proliferation accounts for functionally significant replenishment of the tubular epithelium after ischemia. 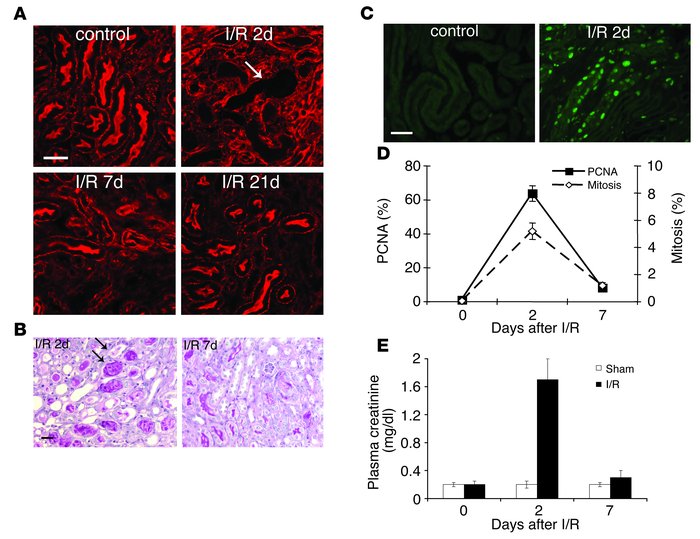