Alzheimer disease (AD) is characterized by excessive deposition of amyloid β-peptides (Aβ peptides) in the brain. In the nonamyloidogenic pathway, the amyloid precursor protein (APP) is cleaved by the α-secretase within the Aβ peptide sequence. Proteinases of the ADAM family (adisintegrin and metalloproteinase) are the main candidates as physiologically relevant α-secretases, but early lethality of knockout animals prevented a detailed analysis in neuronal cells. To overcome this restriction, we have generated transgenic mice that overexpress either ADAM10 or a catalytically inactive ADAM10 mutant. In this report we show that a moderate neuronal overexpression of ADAM10 in mice transgenic for human APP[V717I] increased the secretion of the neurotrophic soluble α-secretase–released N-terminal APP domain (APPsα), reduced the formation of Aβ peptides, and prevented their deposition in plaques. Functionally, impaired long-term potentiation and cognitive deficits were alleviated. Expression of mutant catalytically inactive ADAM10 led to an enhancement of the number and size of amyloid plaques in the brains of double-transgenic mice. The results provide the first in vivo evidence for a proteinase of the ADAM family as an α-secretase of APP, reveal activation of ADAM10 as a promising therapeutic target, and support the hypothesis that a decrease in α-secretase activity contributes to the development of AD. 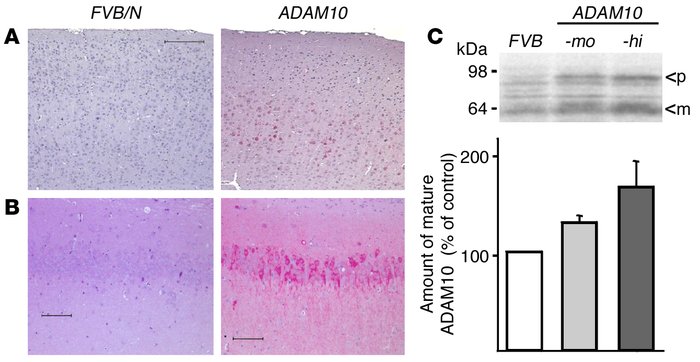